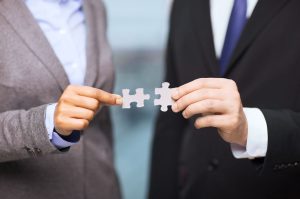 MM was charged with leading a new team that was formed when two internal business lines were merged in a reorganisation.  The team was split between Bristol and Manchester.  There were some role clarity, power and communication issues to overcome in order for them to perform effectively.  MM wanted to be part of the team development rather than having to lead the activities so he asked us to facilitate a programme with him.  We worked hard to understand the situation and to propose a solution that would fit the culture and climate that MM wanted to develop in his team.

We decided to use the Myers Briggs Type Indicator to give the team a reference point and a common vocabulary for describing their personalities and associated behaviours.  We held thorough one to one sessions with each member so that they understood the tool, could critique it if they wanted to and could explore the meaning of its outputs at a personal level.

We then held a workshop for the team, exploring the mix of personality preferences and the risks and benefits of such a mix.  It was a light-hearted, relaxed but business-like event held at a neutral site to eliminate any geographical bias.

We agreed actions to be taken at the end of the workshop and these were integrated into the regular team meeting agenda.  The team then owned their development from then on.

There was a marked change in the relationships between team members even during the workshop.  They began to trust each other, recognising that none of them were a threat to anyone else.

There was an increase in mutual understanding and allowances were made for the different work styles of the team members.

Frank conversations could be had about clarifying roles and responsibilities.  Efficiencies were found and these led to savings for the business.

The Director summarised the success as follows: “the characteristics of individual personality profiles were used to build team success – the whole substantially greater than the sum of its parts”.

Could you or your organisation's executives benefit from our coaching expertise?

Are we working well together? – Here’s a way to find out

Now that your team members have been performing their roles in different locations from each other for some time, it’s […]